No rules. No laws. No mercy. She belongs to them now.

An Earth member of the medical recovery team on Transport Station Zenith, Harper meets two mysterious strangers from an unknown world. With intense eyes and even more intense desires, it’s easy for the two sexy-as-sin aliens to prove how good it can be with them.

Styx, a leader from Rogue 5, knows Harper is destined to belong to him and his most trusted enforcer, Blade. But when Styx is betrayed by one of his own kind, she’s caught in the deadly crossfire. Her mates must tread carefully, for even if they win the battle on the lawless outer moon, they might lose the most important battle of all, the one for Harper’s heart.

Claimed by the Vikens – Book 14

The only thing former Coalition warriors Calder, Zed and Axon have in common are long years spent battling the Hive, and their eagerness to claim their personal reward–their own Interstellar Bride.

When news arrives on Viken that each of the warriors has been matched, they gather at the transport station only to receive two unwelcome surprises.

First, they are all matched to the same woman, and not one of them is inclined to share.

Second, their mate has refused them.

She won’t leave Earth and transport to Viken.

Won’t give any of them a chance to win her heart.

But these warriors will not back down from a challenge.

When one states his intention to travel to Earth and retrieve his mate, the others will not allow him to make the journey alone.

Their mate will be seduced.

One by one, they will tame her.

Make her their own.

Commander Karter is a Prillon Warrior. His first duty is to protect his people, to defend the Coalition worlds from a fate too terrible to comprehend. Battle is his life. His heart. He fights. He has never once been selfish enough to believe he deserved an Interstellar Bride. Until he’s matched at the worst possible time.

Astronomer Erica Roberts has always dreamed of seeing the stars. Volunteering as an Interstellar Bride is a win-win, not only will she be able to see the galaxy, but she’s more than ready to take on the two alien warriors she’s been promised. She’s all in. But when she transports directly into the aftermath of a battle, she quickly learns this won’t be an easy match. Her two commanders are torn between battling the Hive and battling their need for her.

If a new Hive weapon can destroy a Coalition battlegroup in the space of a single heartbeat, what will it do to Commander Karter’s match? And how is he and his second supposed to keep their mate safe if they can’t even save themselves?

Miranda Doyle has spent months in the arms of a mysterious Trion doctor. His hands are skilled at more than just healing, but their casual “friends with benefits” arrangement isn’t enough for her. She wants it all, and the Interstellar Brides Program guarantees her not just a mate, but a perfect match.

Doctor Valck Brax is in love with Miranda, a human female who surrenders to his touch so beautifully. Finally ready to claim her forever, he resigns and returns to her with mating adornments in hand. But he’s too late. Miranda is gone, half a universe away and in the arms of a fierce Prillon warrior.

Captain Trist Treval of Battlegroup Zakar is a cold and cunning fighter. Infamous for his unforgiving nature and calculating ways, war has been his life. Now, with three little words, “you’ve been matched,” everything changes. He’ll destroy anything and everyone who tries to take his beautiful new mate from him, including the foolish doctor from Trion who arrives on the battleship claiming she belongs to him.

She’s been matched, but who will she choose as her mate? 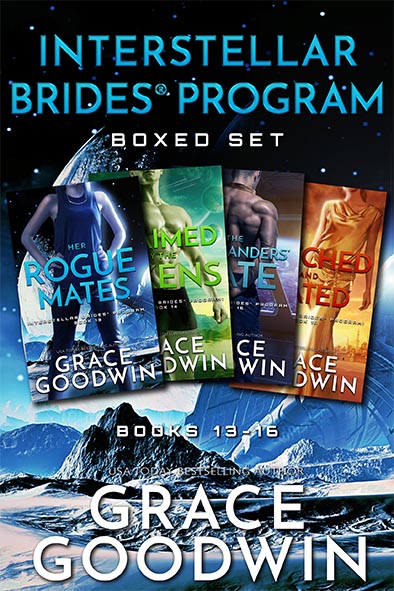