Captured by the Hive, Elite Hunter Quinn will sacrifice anything to save the mate who arrives in the middle of his personal hell. A warrior in her own right, she’s too stubborn to leave him behind. Even if they escape, personal scars run deep. Battle and bloodshed are easy. Healing a wounded warrior’s heart may be impossible.

Whitney Mason is the daughter of a Wall Street con man. When he is sent to prison and her family’s name is destroyed, she is eager for a new life on a new world. Anywhere but Earth. Tested by the Interstellar Brides Program, she is matched to a strong Viken warrior. What she doesn’t know is that her mate and the other two warriors waiting to claim her are on a secret and dangerous mission for the Coalition Fleet’s Intelligence Core. From the moment she arrives on Viken, they are forced to lie to her… about everything… except their desire.

For Alarr, Oran and Teig, the arrival of a bride is an unexpected complication. The timing couldn’t be worse, but IC command is thrilled. A bride is the perfect cover, giving the fighters access to every inch of the famous pleasure resort where they are working undercover. The males are eager to satisfy their new mate, but keeping her safe is their top priority, even if that means lying to her and using her pleasure to take down the enemy. But their sexy mate’s past will come back to haunt them all, for even if they survive the mission, the truth will be revealed and their beautiful, curvy female can forgive anything—except lies.

The Rebel and The Rogue – Interstellar Brides 19

A rebel alien roaming the far reaches of the galaxy. An Interstellar Bride on the run for her life. When her life crash lands into his on a remote planet, they’ll need each other to survive.

The Interstellar Brides Program guarantees it can match any female on Earth, even a cynical, street-wise, and very jaded Zara, who just wants to start over. But when she arrives on her new home planet… she gets more than promised:

A sexy as hell pirate who demands she follow his orders? Um, what?

Zara didn’t volunteer for this mess, but she’s a fighter. A survivor. She’ll work with a sexy—did I say bossy?—rebel to bring down the bad guys and take on a Rogue 5 legion in order to obtain what she wants, a white picket fence kind of life in outer space… if she can live long enough to get it. 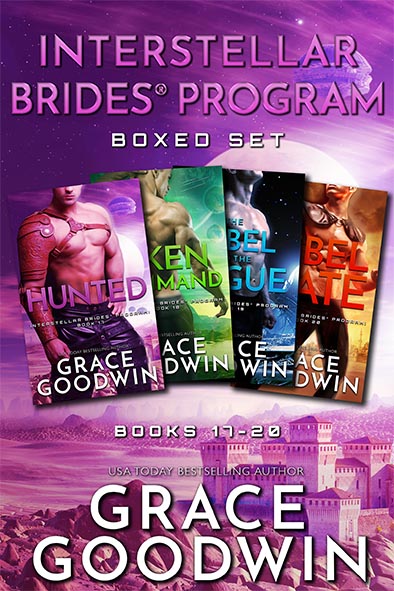