Read the complete adventures of Faith and Thor in Ascension Saga, Volume 2 (Books 4-6)

Faith Jones is an Earth girl…and she’s not.
She’s half Aleran. And not just any half – a royal half.
Her mother is the queen, her sister is the heir, and her twin is determined to kill every alien on the planet if that’s what it takes to find their kidnapped mother. Faith’s job? Infiltrate the Jax household and spy on one of the most powerful families on the planet. There is a traitor in that house, and Faith is determined to find him, no matter the cost.

Thordis Jax always gets what he wants. He’s rich. He’s gorgeous. He’s the heir to one of the most powerful families on the planet. But when his body comes alive at the sight of Faith Jones, it will take every ounce of seduction and skill he possesses to get into her bed—and to earn her trust.

Faith thinks she’s got it all under control, until she meets Lord Jax’s oldest son, Thordis. He’s sexy. He’s hot as hell. And the first time he sees her, he tells her the one thing she absolutely does not want to hear…Mine!

A real Romeo and Juliet scenario. Which just stinks. Because as Faith discovers, it’s tough to hunt down a traitor when the only thing her heart wants is to give everything to an enemy. 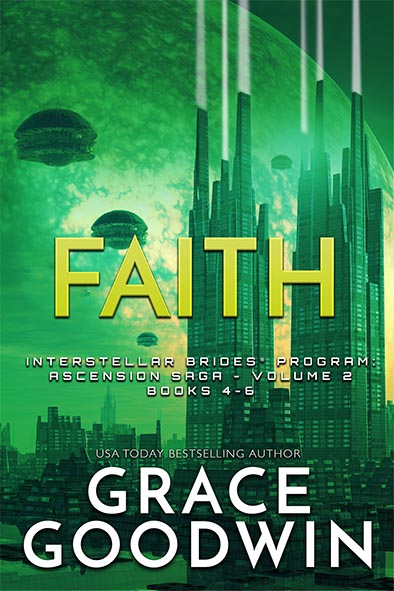