Mastered by her Mates – Book 6

Amanda Bryant has been a spy for five long years, so when a deadly enemy threatens Earth’s very survival, Amanda is asked by her superiors to accept the most dangerous mission of her life…volunteer to be an alien’s bride, to share the strange warrior’s bed and then betray him.

Accepting the assignment, Amanda is processed as the first Interstellar Bride and transported halfway across the galaxy to her new mate’s battleship. She awakens to discover she has been matched to not just one huge Prillon warrior, but two.

Shocked by her craving for the touch of two dominant, alpha males, Amanda realizes the threat to Earth is very real, but the enemy isn’t from Prillon Prime as she’d been told. How can she protect the warriors she has grown to love and save the people of Earth from making a terrible mistake? Will her human contacts believe her when, with every touch, every look, they will see just how thoroughly she has been mastered by her mates?

Tamed by the Beast – Book 7

When Tiffani is mated to an Atlan warrior believed lost to mating fever, she will stop at nothing to save him, including sneaking into an Atlan prison to seduce his beast..

Sick and tired of the dead-end path her life is taking, Tiffani Wilson heads to the nearest Interstellar Bride processing center to start over. She’s promised an amazing mate, an Atlan Warlord who will not only relish her plus sized body, but heal her lonely heart.

Commander Deek of Atlan has lost control of his inner beast and sits in an Atlan prison cell awaiting execution. Unfortunately, nothing can save an unmated male.

When Tiffani’s transport to Atlan is denied due to her mate’s unstable condition, she will stop at nothing to save him and the life she was promised. Her mate is out there, he’s in trouble, and she knows she’s the only one in the universe who can save him.

Deek and his inner beast take one look at Tiffani’s soft, lush body and know they will do anything to possess her, even if it means pushing her sensual limits or taking her over his knee. But it’s not just Deek’s tenuous hold on the beast that stands in the way of their happily-ever-after, for Deek’s descent into mating fever was no accident, and his enemies will not surrender so easily.

Mated to the Vikens – Book 8 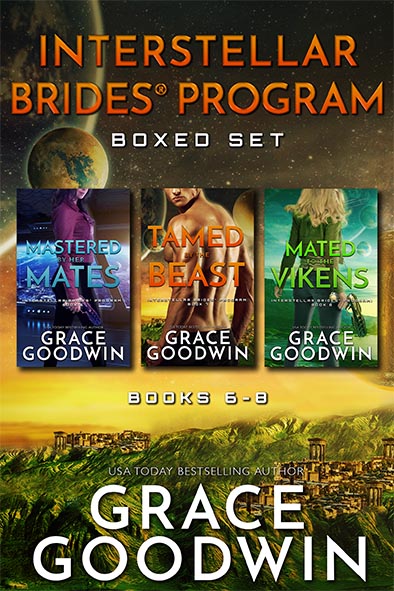