Warlord Wulf thought nothing could be worse than being tortured and contaminated by the Hive. That was before he’s ordered to transport to Earth and represent The Colony in an unfamiliar horror… a human reality show. The Bachelor Beast is the hottest new program on Earth, but being set up with two dozen clingy females is not his idea of a good time. When his Beast refuses to show the slightest interest in any of the show’s potential mates, he knows he must choose one or die due to his raging mating fever.

His Beast prefers execution to claiming anyone but his true mate. Wulf is resigned to his fate, a one-way trip to Atlan, a prison cell and execution. It is the only honorable thing left to do.

Until one glance, one sweet, feminine scent lingering in the air and his beast rages for a female who is not supposed to be his.

But try telling that to his Beast when his entire body transforms on live television and one simple word thunders from his lips…MINE.

Maid for the Beast – Book 2

Beauty and the Beast – Book 3

I am a Warlord. A beast.

An assassin for the Intelligence Core.

Even so, I’ve been sent to Earth for a simple mission: Find a mate.

I hold no hope. Who would want me? I’m scarred… inside and out.

But one look at the human beauty and there is no question, she’s mine.

When she is taken from me, I will use all my training to save her from my enemies.

Nothing on Earth—or any planet in the universe—will keep me from her. 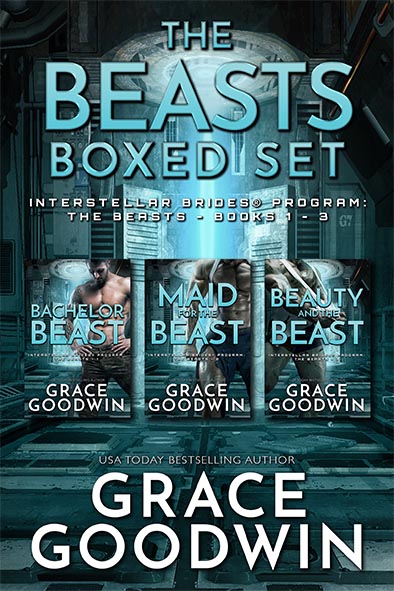