Atlan Warlord Jorik guards the Coalition Fleet’s Processing Center on Earth, protecting warriors and brides without mercy or distraction…until he sees Gabriela. She is everything the beast within him craves. Soft. Curved. Unafraid. He dreams of courting her properly, wooing her into accepting his beast’s claim, and making her his—body and soul. Danger strikes and his beast takes control—resulting in his immediate removal from Earth. From Gabriela.

Gabriela fell in love with an alien Warlord who fought to save her life, then disappeared, only to learn he was later killed in a battle with the Hive. She moves on with her life as best she can, with one beautiful reminder of their time together. A baby.

When she learns Jorik isn’t dead, but banished to the Colony, she and the baby are sent to find him. The problem? He’s not just contaminated, he’s been newly matched by the Interstellar Brides Program. And not to her.

Professional surfer Mikki Tanaka didn’t want to leave her beloved Hawaii, the ocean waves, or the vibrant sea life she’s worked so hard to protect. But her protests and aggressive tactics didn’t mesh with the law and she’s found herself behind bars. Her choice? Ten years in jail or life as an Interstellar Bride. Never one to shy away from adventure, she decides to take her chances in the stars—with not one, but two sexy-as-hell alpha warriors on The Colony.

Surnen, a Prillon Warrior and trusted doctor, has been waiting for a bride for years. Banished to The Colony, he’s given up all hope, until a black-haired Earth beauty instantly steals his heart and his breath. But the highly disciplined doctor likes protocols and control, in bed and out of it. His second and an equally ruthless warrior, Captain Trax, agrees. Unfortunately, their new mate has a wild streak, a thirst for danger, and an appetite for violence that both shocks and thrills them. When her penchant for stirring up trouble brings danger to The Colony, they’ll stop at nothing to save her.

Claimed by the Cyborgs – Book 9

Two honorable warriors with nothing left to lose…until they find her.

Prillon warrior Thomar Arcas is the royal heir to his ancestor’s legacy of dishonor, betrayal and death. When he was captured by the Hive, some on his home world cheered. Some sighed with relief. None shed a tear.

Thomar and his second, Varin, break free and destroy an enemy base, barely escaping with their lives. They transport to The Colony, the last refuge for contaminated males. Upon arrival they suffer in agony, their cyborg implants fighting for control of the powerful warriors.

Defeat is not in their blood. Not in their history. Not in their souls. Unable to sever their ties to the Hive integrations, they suffer relentless pain. Unwilling to force others to suffer, Thomar has chosen an honorable death over further disgrace; until they are matched to a human female from Earth who will do anything, and sacrifice anyone, to save them. 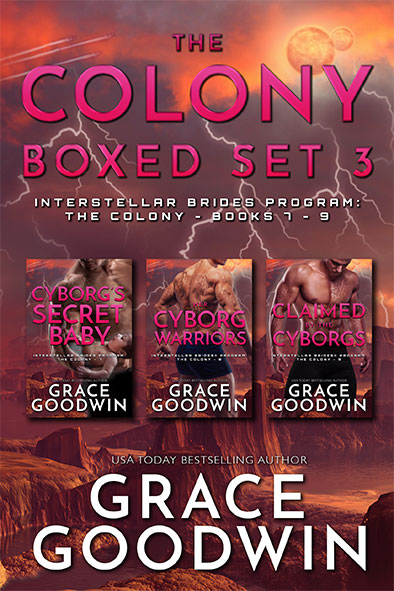